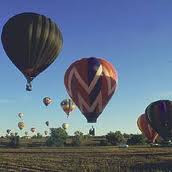 This past weekend was the annual "Great Mississippi River Balloon Race".  While there is a lot of fun and excitement that goes on during this time there is a great deal of work and planning that makes it the success it has become.  From the city of Natchez to the teams of balloon racers and everyone else in-between, they each have a role to play in this great event.  But there are two things that are crucial to the success of the weekend that we at times may loose sight of with all the other things going on such as bands, vendors, rides, and who can forget the fireworks display on the river on Friday night!   These things are:  1.  the hot air that fills the canopy of the balloons, which gives them lift.  2.  The wind to move the balloons as they race across the countryside.

As I met with our children during our midweek activities I shared with them the lesson about the things that we cannot see, but still have a huge impact on our lives.  I took a rubber balloon and blew it up and told them about two words.  The first was the Hebrew word (ru-ah) and the Greek word (pnue-ma); both are words that are interchangeable with wind and the Spirit of God.  What I wanted to share with them was a lesson that related, through the model of a simple balloon, the evidence of God's Spirit moving in our lives and around our lives.  For example, in Genesis 1:1-2 the bible says, "In the beginning God created the heavens and the earth.  the earth was formless and void, and darkness was over the surface of the deep, and the Spirit of God was moving over the surface of the waters."  From the very beginning, the Spirit (ru-ah) of God was moving over creation.  It's in Genesis chapter 2 that we see God moving not only over the surface of the deep, but in the very life of man as God breathed life into the first man, Adam.  "Then the Lord God formed man of dust from the ground, and breathed into his nostrils the breath of life; and man became a living being."  The Spirit of God worked in the creation of the world, but also in the being of man to breath life!  For every balloon that competed in the races this weekend they needed air to fill their canopies in order to give them life (in a sense), to produce lift, and to sustain them all along the way of their race.  This is the analogy of how God's Spirit works in our lives as we run the race set before us.

It is this same Spirit, in the New Testament that continues to breath life into men, both physically as well as spiritually.  In turning to the Gospel of John we come upon a man by the name of Nicodemus who was a leader of the Jews and was curious to know more about this being "born-again" that Jesus was teaching.  Jesus in response to Nicodemus spoke these words in John 3:8, "The wind blows where it wishes and you hear the sound of it, but do not know where it comes from and where it is going; so is everyone who is born of the Spirit."  It is the Spirit of God who works in our lives and brings us to a new birth in Christ as He (the Spirit) fills us.  Not only does the Spirit of God fill us, He as well moves us.  In 2 Peter 1:20-21 Peter writes, "But know this first of all, that no prophecy of Scripture is a matter of one's own interpretation, for no prophecy was ever made by an act of human will, but men moved by the Holy Spirit spoke from God."  Regardless of who you are, everyone who is in Christ is not only filled (indwelt) with the Holy Spirit, but is to be moved by Him as well.  Just as a balloon is moved by the stirring of the wind so are Christians moved by the stirring of the Spirit of God.  With that, a great deal of the movement caused by the Spirit is from the truth of God's word, the Bible.  Paul in his second letter to Timothy writes that "All Scripture is inspired by God (God breathed)" and the author of Hebrews writes that "the word of God is living and active."

Paul in Philippians 3 tells the church if they have been filled with and are moving according to the Spirit then they will be made and moved as those "who worship in the Spirit of God and glory in Christ Jesus..."

There are two great truths that can be learned from this illustration of a hot air balloon on a spiritual level.  It is that God, through His Spirit, is willing and able to:
There is also a third truth, and I'll close with this.  If God is able to  save your life with His Spirit and sustain your life by moving you with His Spirit, then God is as well able to:

3.  Keep you for life with Himself--securing your life

Praise God; He moves!
Posted by Unknown at 6:36 PM