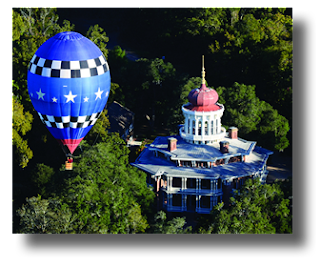 Not long ago, I read a story of a pastor who, with his wife and another couple, went for a hot air balloon ride. While he committed to this idea of a beautiful day flying freely around in the air with the woman he loved there were some things that he didn't consider when the ride was being arranged.  The greatest thing that he overlooked was the emotion of fear, the fear of heights.  This husband was able to work through his fear better than his wife, who was short of petrified.  To get his mind off of this fear he struck up a conversation with the pilot in hopes to better settle his and his wife's nerves.  So after a few questions and some conversation, this pastor learned that the pilot was not as experienced nor as passionate about flying hot air balloons as he would have hoped.

Instead of being calmed and comforted by the pilot, everyone's fears jumped and the wife of the other couple was so fearful that she leaned over to the pastor and said, "you're a pastor, do something religious".

The truth of the matter is that life is, in many ways, like a balloon ride.  It can have it's moments of breathtaking beauty and exhilarating excitement, but also moments where fear takes hold and squeezes the very breath out of you.  Life, like a hot air balloon ride, can and will have bumps along the way where the basket of your life is jostled, shaken and even overturned.  The question is, "when your life is being uncontrollably tossed about, where do you place your trust, your faith"?  The truth is that everyone has a belief in something or someone, regardless of who you are you place your faith somewhere.  How does this affect your life and how is it reflected in and through your life?

If your faith is in Jesus Christ; if He is your pilot (not your co-pilot), what does your faith look like, internally and externally?

We are all living in a world where the days are dark and the times are uncertain, but Jesus came to give proof that there is no storm He can't settle and there is no fear He can't overcome.

Matthew 8:23–27 (HCSB)
Wind and Wave Obey the Master
23 As He got into the boat, His disciples followed Him. 24 Suddenly, a violent storm arose on the sea, so that the boat was being swamped by the waves. But He was sleeping. 25 So the disciples came and woke Him up, saying, “Lord, save us! We’re going to die!”
26 But He said to them, “Why are you fearful, you of little faith?” Then He got up and rebuked the winds and the sea. And there was a great calm.
27 The men were amazed and asked, “What kind of man is this?—even the winds and the sea obey Him!”

For Jesus and His disciples it wasn't a hot air balloon, but a boat; however, Jesus calmed the storm and brought safety to the men. In that moment Jesus didn't just talk the talk, He walked the walk and gave proof of His power and His deity.  How about those of us who follow Jesus and call Him Lord, do we trust Him enough, do we have the faith to not only believe, but to walk the walk in faith?  A wonderful passage to turn to concerning this is James 2.

James 2:18–23 (HCSB)
18 But someone will say, “You have faith, and I have works.” Show me your faith without works, and I will show you faith from my works. 19 You believe that God is one; you do well. The demons also believe—and they shudder.
20 Foolish man! Are you willing to learn that faith without works is useless? 21 Wasn’t Abraham our father justified by works when he offered Isaac his son on the altar? 22 You see that faith was active together with his works, and by works, faith was perfected. 23 So the Scripture was fulfilled that says, Abraham believed God, and it was credited to him for righteousness, and he was called God’s friend.


If we believe (have faith) we are called to give evidence of it through our works; not that they save us, but that they show others what and in whom we trust.

Life is not always easy and there are moments that will be unsettling in our lives, but if we have faith in Jesus and trust Him to be not only our Savior, but our pilot.  Then we will be able to endure the moments when the basket of our lives is jostled and tossed.  When the waves seem to much to bear, look to the One who is not only able to calm the winds and the sea, but is able to bring calm to our lives and the fears that come upon us from time to time.